Spring has arrived and I have awoken from my boozy-snooze. It seems the front doors are bolted, everyone is huddled in the dining room (where there are no bathrooms) and some goblins are playing tetris outside.

The goblins seem mostly content so I think the dwarves can go about their business given the front drawbridge is pulled to.

Keenly, the engravers jump back to their work capturing the greatest moments in this fort:

With over 180 dwarves now milling around the fort and only 7 employed to protect the fort, I sat down with the others and worked out what the hell everyone is doing. Took a few months to speak with everyone and debating whether or not we needed 4 master lye makers (no-one could categorically describe what lye was or used for). By the end of it, we had 40 military-worthy dwarves (ie 40 completely useless at anything else).

Assembled into great squads the began training. It was a little slow at first. No, it was ridiculously slow. No-one knew one end of a sword from the other and once someone did work it out they couldn’t clear communicate this to the others. Stabbing them in the backside doesn’t count - although you could argue is “clearly communicating”. 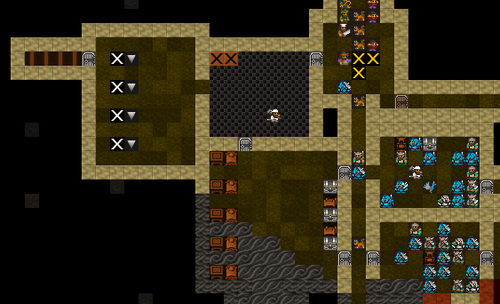 At the back of the archery range (where hopefully no-one will see) is the danger room. The floor is covered with training spikes, and the door unlocks only from the outside. It’s not a nice place but it makes dwarves learn *fast*! Some of the dwarves had befriended cats, dogs, blue penhens…, and so I had to be careful that their precious peahens didn’t come swanning in to see what all the excitement was. Unfortunately, a turkey did squeeze past when the door was open. We had to stop the training whilst the gibs and vomit were washed away.

Like all great psychology experiments, when you can’t see what the lever does when you pull it, you’ll pull it endlessly! With this lever connected to all the spikes, and the dwarves locked in they began to train at a rate they never even knew they could train at. Within a few days they had progressed massively…

Becoming legendary in fighting and using their shields. Now we were going to be ready for those goblins! …oh, it seems they couldn’t beat their high score or the batteries on the Gameboy ran out and they left. Nevermind, we’ll be ready when they return.

With an elite army - one that safely hold swords without losing eyes - ready we needed to improve the defenses of the fort. Whilst there were ample traps and a drawbridge, we couldn’t actually fend off any attackers without letting the whole fort be open to the world.

The digging and construction began and, whilst taking the best part of a year, was mostly completed:

Goblins and whatever FUN is out there will now have to walk along this tortuous path, where marksdwarves can safely and conveniently shoot them. (Plus more traps…gotta love those traps).

Elsewhere in the fort, food and booze production was steady. A few more migrants did arrive and so a large expansion of the bedrooms was underway. No-one knew how many beds we had but no-one could be bothered to count them either.

Mining has been minimal, and supplies of metals are very low. The mayor still wants his lead door - possibly just to lick and go cuckoo - but having only granite he’ll have to keep waiting for it. Once we’re satisfied with the safety of the fort, perhaps then we’ll dig a little deeper. I know the dwarves are greedy for the depths but I’m greedy for a nice warm bed and pint of gin each night and not having to hold back a door as something with more eyes than toes and lead door melting breath is bashing on the other side. 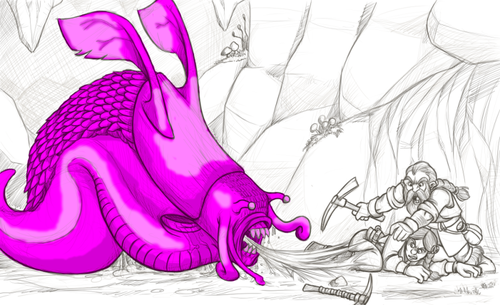 A few dwarves had funny turns and took to workshops to craft some item that came to them in a dream. They obviously had pretty boring dreams and one dwarf made then proclaimed the greatest mechanism that ever was. Which is all very good and well, however, this thing sat at the top of the pile (the dwarf refused anything else to sit on it) and so whenever someone came to make a lever or trap they’d grab it and go to their work. I finally gave up cancelling it’s use and the greatest mechanism of all time is now sat in some weapon trap waiting for a titan to stand on it and snap it like a mint wafer. 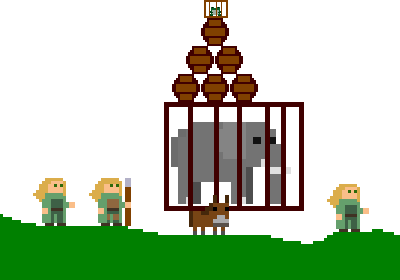