So the previous administrator and I decided that it would make sense (plus for tax reasons) to share the running of the fort. Taking it from spring to spring each then handing back to the other whilst we spend a year understanding the mysteries of booze. Mysteries including: Where’s all my money gone; and who are you and where are my pants?

So returning to the fort I wanted to see what grand schemes and marvels had been built. The dwarves had been busy engraving the masteries and wondrous tales that the past year had held. I looked closer at the text:

…cheese. I see. Least the turkeys have themselves a nice nesting area

So let us commence!

The fort has certainly grown with around 80 hardworking, intelligent, polite….well 80 bodies are now milling around the place half working half drinking and napping. So the main hall needed a bit of expansion 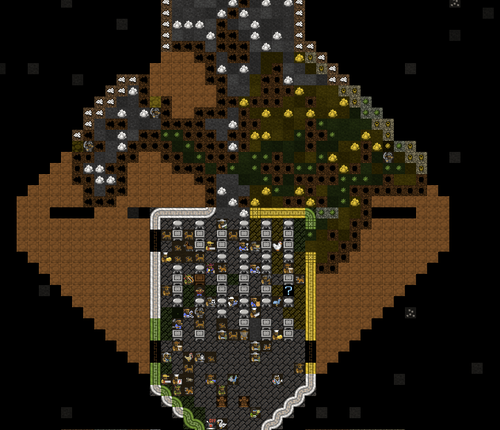 and we need a few more bedrooms for hangover recoveries 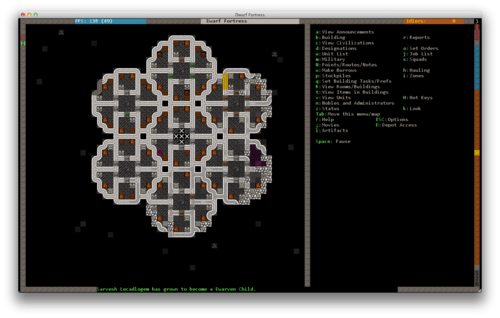 Some elves come and surprisingly have some useful stuff. Humans visit later in the summer and the fort stubbornly parts with many cut gems in exchange for a few weapons and anvils. Watch your toes lads.

The child snatcher previously seen offering free candy appeared again. Once he caught sight of an angry dad with a short sword he soon scarpered.

It was the middle of the summer and some of the new migrants (the fort is holding around 120 now) are getting bored and fighting in the corridors so we setup a new barracks and get some proper defence training.

…and not a moment too soon! The fort’s first goblin siege. 8 disgusting goblins come rushing in armed with swords and crossbows. Holdstake’s two top squads (the only two squads) immediate rush out to take on these goblins. Unfortunately being only two weeks in training with the most violent use of a sword being a filleting knife to gut a fish, four honorable dwarves lose their lives in battle….

…but the goblins vanquished the rest of the fort creep out from their burrow and rush out into the world to pick the pockets of goblins and fallen comrades alike. 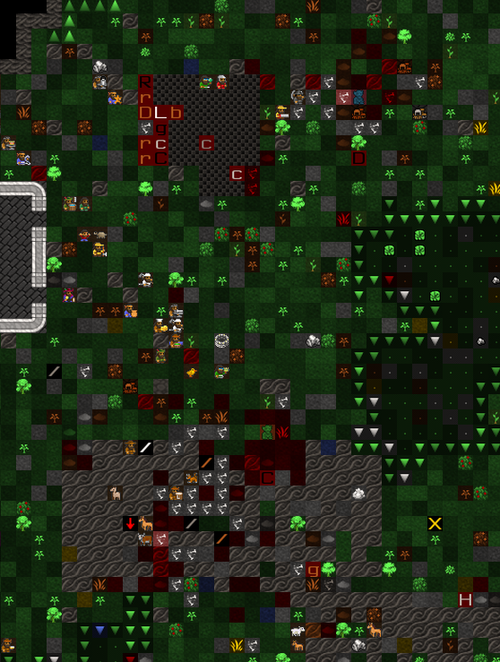 A few horses, cows and whatnot got in the way of the goblins (and maybe our) swords and bolts. The fort calms down again after the first siege and a few more migrants arrive, presumably thinking that Holdstake can offer safety as well as illogical mayors.

As winter draws in, this administrator is planning his time off in the spring with cocktails and chocolate eggs. Little does he realise (or listen to concerned residents) that the booze supply is running dangerously low…

In the depths of winter, when everyone is cuddling up to llamas and turkeys are looking nervous, ANOTHER goblins siege beholdens the Holdstake. 14 pike welding goblins approach the fort at great speeds. Whilst the two squads continued their training after the last attack they weren’t the lethal fighting machines everyone hoped for. In a desperate attempt to restore peace again we rounded up any other dwarf that could identify the pointy end of a sword and sent them all out to face the goblins.

The battle was bloody and brutal, only a few dwarves survived but after the goblins were chased off. The fort went into lockdown and the drawbridge was pulled. 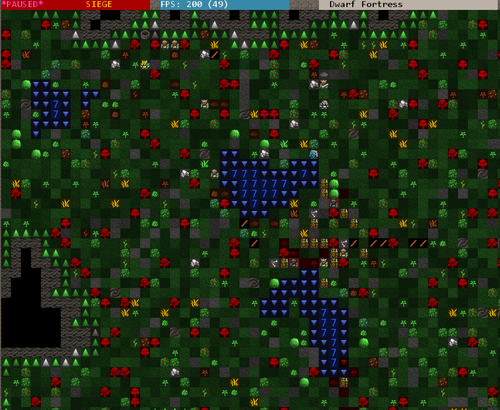 Goblin pikemen seen across the hills. With wounded dwarves, we quickly setup a hospital with beds and damp sponges. Only that dampness was the only supply of water we had. Being the coldest month of the year, all the surrounding lakes had frozen and we had no water for our brave heros. Miners set to work channelling out the frozen pools with hopes of making some melt water. It worked but it was barely enough and sadly several dwarves had already past away.

I then also realise we have no booze and the previously happy dwarves are now dying of thirst or going mad in the interim. Having been distracted with getting water for the hospital, I then turn around and see over 100 corpses piled up outside as the drought reaches its peak.

The last remaining adults are fuming and have taken the law into their own crossbows. The chaos was brief but enormous.

The first day of spring arrives. Only to be seen by 7 orphans and one strangely content engraver. I guess he’s got a lot of material for the rest of the dining hall. 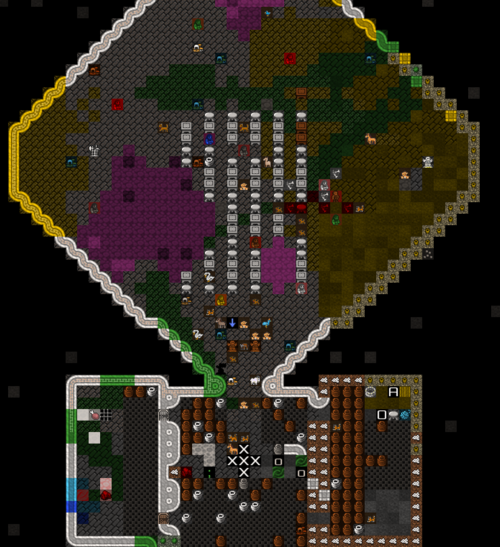 Corpses and Miasma. The once bustling main hall is a saddened place.